Here is a demonstration of a libcurl binding for XEmacs.  It is currently quite limited, but does suffice to make a “hello, world” type of request. 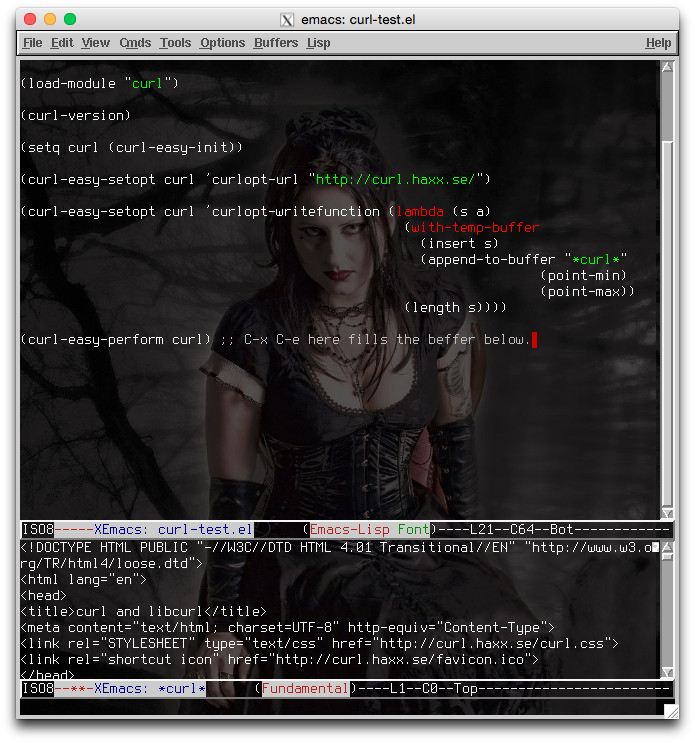 It is currently a very thin layer on top of the C API.

Is it good for anything?  That’s a good question.  Right now I have no particular use for it myself, so the code will probably remain under my chair for quite some time to come.

If someone has a request that doesn’t require much coding, I may add that feature.

I suspect it’ll mostly be useful for some sort of social media client, Twitter, Facebook, Tumblr, …, or as a transport mechanism for Tramp.  I’m very curious about using it with Tramp myself, particularly for sftp transfers, but I won’t be doing the required coding any time soon.

Of course, the multi interface to libcurl is the real reason to use it, with a single threaded program like XEmacs.  Now whether that is feasible within XEmacs is the real question.  It’ll probably need to tie somehow into the event loop, of which I know nothing about — yet.

XEmacs Bindings for libcurl on GitHub.

The background picture is used with license.  The model is Dóra.  Photographer is Gilliman.